Preparing Illinois for a Renewable Future 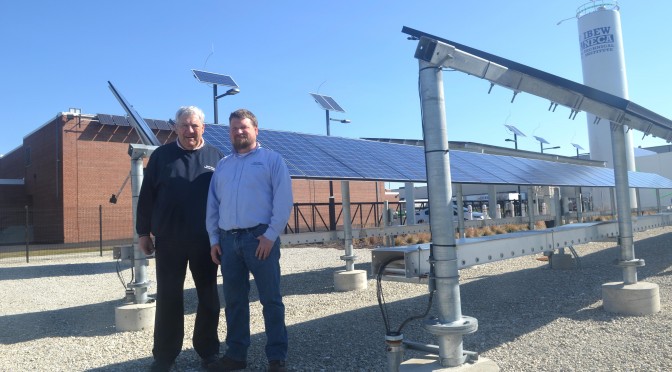 We’ve said it before but it bears repeating: Illinois is ahead of the pack in terms of green energy infrastructure and efficiency. We rang in the year with news that the U.S. Green Buildings council had ranked Illinois as number one on their list of top ten states with the most green building space per capita. And just a few weeks ago, our partner Citizens Utility Board worked with the Environmental Defense Fund to help ComEd develop tools for tracking the smart grid’s environmental impact. Here’s more proof that Illinois really is a leader in green energy:

Just outside the Chicago city limits, in Alsip, Illinois, electrical union IBEW Local 134 boasts a state-of-the-art renewable energy training facility.  IBEW’s Harry Ohde, Assistant Director of Training, and Bob Hattier, an instructor, were kind enough to invite me out to the field and show me around. As the sun rose higher and higher during our visit, you could hear the mechanical sounds of solar panels adjusting their angles to catch the maximum amount of rays. From a solar-powered LED streetlamp to a solar carport, electric vehicle charging stations, an electric car, a wind turbine, and a climbing tower — where students learn how to safely climb high enough to repair these massive generators — the variety of technology on display was truly impressive.

How to store solar and wind energy is one of the challenges to renewable energy technology. Coal is basically available once it’s been mined, but we need to find efficient ways to store solar and wind power so they can be available even when the sun isn’t shining and the wind isn’t blowing. Anticipating this important challenge, the IBEW training field also includes several different cutting-edge energy storage options for students to learn about. Currently, the energy produced by the solar fields powers the Technical Institute’s welding lab during the day.

Harry and Bob were the driving forces behind the creation and construction of this state-of-the art facility. Construction began in 2013 and was finally complete in September 2015, using all American-made products. Hattier says that one of the special features of the training field is that it’s designed for students to build, take apart, and build again. “Most other centers are just showcases. You can’t do the training on them, and that is just critical.”

With Illinois leading the Midwest in clean energy jobs, it’s no wonder there’s a demand for hands-on training in renewable energy infrastructure. Harry says that he and Bob envision an expansion in the training programs offered at the facility. I can’t wait to see what they add to their impressive facility next!

Watch this video for a virtual tour of the training center.