The CTA Is Setting High Goals To Combat Climate Change 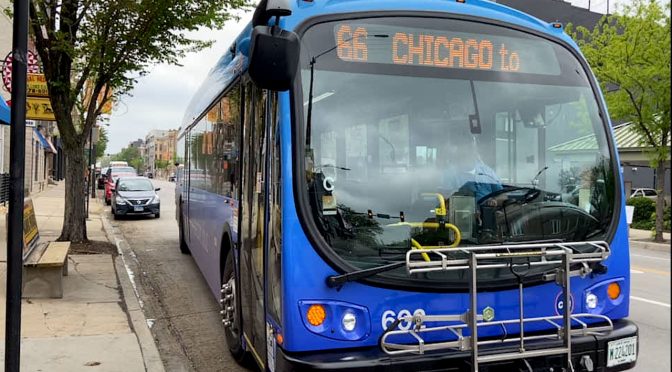 Rising greenhouse gas emissions and the increasing effects of climate change have prompted many cities to invest more money into green solutions. One of the ways Chicago is seeking to become a sustainable city is by switching to electric buses for public transportation. In 2019, CTA ridership totaled 455.7 million; this breaks down to 237.3 million bus rides and 218.4 million train rides. The pandemic reduced public transportation by over 50% in 2020, but ridership is climbing towards previous levels this year. Public transportation has always been a greener option than driving personal vehicles daily; by increasing the electrification of public vehicles, the city’s emissions will decrease.

According to the United States Environmental Protection Agency, gas, and diesel-fueled vehicles account for nearly a ⅓  of all greenhouse gas emissions. In large metro areas, the number of vehicles used daily contributes to poor air quality, specifically in low-income areas. Chicago ranks 16th in the nation for air pollution in the U.S., as reported by the American Lung Association. This is one of the inspiring factors contributing to the city’s decision to commit to bus electrification. ”We’re creating a low carbon or no carbon opportunity for transportation around the city that’s affordable and reliable and accessible to everyone.”- Kate Tomford, Senior Analyst of the Chicago Transit Authority.

Not only will bus electrification provide cleaner air quality, but this transition will also save money on fuel and maintenance, reduce noise pollution and also provide a roadmap for other major cities to follow suit. Chicago is among the first major cities to test the feasibility and reliability of electric buses in extreme weather and full passenger capacity. In April 2019, Chicago City Council passed a resolution to transition the entire CTA bus fleet to electric vehicles by 2040. The CTA has been working steadily towards that goal ever since.

The local and state governments are on the electrification team for a greener Illinois. On Jun 25, 2021, U.S. Representative Bobby L. Rush, Chairman of the Energy Subcommittee of the House Energy and Commerce Committee, announced that the Chicago Transit Authority would receive $6,988,646 in funding from the Federal Transit Administration at the U.S. Department of Transportation to implement the necessary purchases, training and equipment updates to make the goal of transitioning a fleet of 1900 buses to renewable electric energy by 2040.

The CTA already has experience with electric transportation as they’ve been running electric trains for decades. They have the engineering capacity and can pivot their current knowledge to achieve the goals of a fully electric fleet rather quickly as long as ComEd makes further updates to the electrical grid. There is promising evidence that ComEd will do their part as they are also committed to electrifying their fleets as well. To keep Chicago growing, everyone must work together towards a clean energy future. “To continue attracting people to cities, we need to have high-quality air to encourage people to see urban living as a healthy option.”- Kim Tomford.

The Chicago Transit Authority feels confident that it will meet its goal of bus electrification in 2040. As of April 2021, they introduced six electric buses to run the #66 route and begin testing road performance. “The introduction of these new electric buses is just one example of how the CTA is committed to adding more green vehicles, addressing climate change, and being more environmentally conscious,” said CTA President Dorval R. Carter, Jr.

But there is still a lot of work to be done. Obstacles such as grid improvements, terminal reconstructions, cold temperatures, and determining how mid-service charging for buses will be accomplished. As Kim Tomford said within the video, “If we at CTA can demonstrate the success of transitioning to electric vehicles, that can serve as a role model for other fleets.” We at SmartPower Illinois encourage others to make the switch as well! If you are interested in the possibility of a personal electric vehicle but are unsure if you can afford it, check out another post of ours, “Are Electric Cars More Expensive Than Gas Cars?”